‘Tis The Season For King Tides…. What Could Possibly Happen?....

We are entering the season when we experience the highest tides of the year.  The term “King Tide” is nothing more than a slang term for extremely high tides.  In our area, all waterfront properties need to pay attention to these tides.  There is a LOT more to it than just what you see on the Tide Chart.  In this blog I want to share some science, some anecdotal stories and a worst case scenario backed with historical data.

This highlighted value above is hyperlinked to the chart below that shows tide impact at multiple barometric pressures. 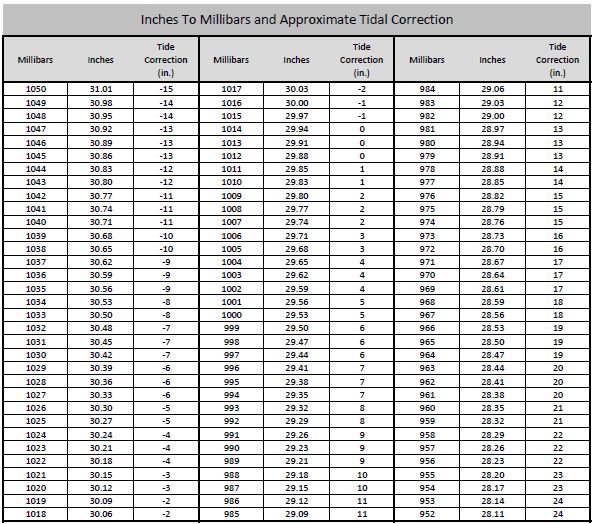 So this covers the "easy" calculations for tide level.  Barometric pressure is just one of the elements that can affect predicted tides.

The other factors are:

Storm Surge – This is caused by the wind pushing the water onto the shoreline.  It can be a VERY significant effect during storms.  This is what we hear about all the time with hurricanes.  The same physics apply to our wind storms, just at lesser level.

Heavy Rainfall and run off can increase sea level close to shore.  Rainfall alone can cause shoreline flooding.

Enough science….  Now for a story….

A Little History and a Story
In the early 80’s we had a storm I will never forget.  I was Fire Chief at the time and I saw an incredible amount of destruction.  This was pre-internet and forecasts were still done on TV with a chalkboard.  I didn’t even have a weather station.  I woke up in the middle of the night and the wind was howling.  It also sounded a little different too.  The power was out as well.  At 5:00am I got a frantic phone call from one of our volunteer fire fighters.  He said that his house, garage and car were under water.  Everybody in his area was experiencing flooding.  I jumped in my car and took off right away toward his place.  When I got close to the Nature Conservancy on Twin Spits road, it was flooded….  With salt water.....  Rawson Swamp was overflowing onto the road.  I looked at it carefully and took a chance to traverse this area that had floor board level water.  I was informed that shortly after I went through it was impassable.  When I got to the firefighters home it was exactly as he described.  Houses, garages and cars flooded….  I really couldn’t believe what I was seeing.  There was nothing we could do but wait for the wind and tide to subside.  I ended up spending that time with an elderly woman that lived alone.  The waves were crashing directly into her home.  The whole house shook violently with every wave that struck it.  When the tides subsided we saw that her 12” concrete bulkhead had been totally destroyed.

This is just one of many stories of destruction from that day.  Many homes were flooded and roads were impassable.  Cars were destroyed.  There were stories of folks finding their chest freezer at the other end of their garage after the flood.  I could go on and on about this horrific experience.  Yes….  Peaceful Hansville can have catastrophic storms.

So…  What happened with this storm?  We were watching our analog barometer drop like a rock the night before, so I knew something was coming.  As I said, it sounded different….  That is because this incredible wind was out of the East or ESE.  This is a rare direction for us.  I would estimate the wind gusts at 50+ mph.  This all happened at the exact same time of a king tide.  Low barometer, high winds and high tides are a formula for disaster.  Are we prepared?

Worst Case Scenario:
I would like to share some video and then create a case study for a worst case scenario.  First, let’s look at the video.  This was taken on January 18, 2017.  We had a very high tide and low barometer and I drove around Hansville to see what areas were impacted.

Now I have some data to lay over this video.  It was taken after high tide and the water had already receded about 12".  The forecast high tide was 11.45 feet at 8:35am that day.  At high tide, the wind gusts were 16 mph.  The barometer was 29.26” or 991mb.  This would impact the tide by +9”.  The net result would be a high tide of 12.2 feet.  Since the video is after the high, it is probably around 11.2 or so.  Of the 3 elements that can really cause flooding, it was a “so-so” event.  The forecast tide was high, but not real high.  The barometer was low, but not real low.  The wind was essentially not a factor.  I’ll share one more observation from that day.  The Driftwood Key launch ramp was completely under water.  In fact, half of the parking lot was submerged too.

So, let’s put together the perfect trifecta for disaster.  Think of the video you just watched and we’ll adjust a few factors.  First, let’s start with changing the forecast high tide to 13.5 feet.  Yes, it’s possible....  The lowest barometric pressure I have recorded on my site is 28.65” or 970mb.  Let's use that number....  The high winds my site recorded over that period were 46mph.  I had a shorter anemometer mast back then, so realistically the winds would have been 50+ mph.  Fortunately the high tides that day were "only" about 9.75 feet.

So, let’s run the numbers. Barometric pressure of 28.65” results in an additional 17” to the high tide.  If the predicted high is 13.5 feet, the actual theoretical high tide would be 14.9 feet.  For good measure, let’s add some 50mph wind.  This could easily add another foot or two.

In the video, sea level was about 11.2 feet.  This worst case scenario would result in a 14.9 ft. tide….   plus another 2 foot storm surge.  Watch the video again and visualize sea level about 5 feet or more above what you see….  With 50mph winds.

Are We Prepared?
This is an extreme depiction of what "could" happen.  More than likely we will never see this, but something in between is definitely not out of the question.  Are we prepared?  It’s not just waterfront properties.  Roads would be blocked in this scenario due to flooding.  Do you know where the flooding will be and do you have an alternate route?  Floods happen fast.

I put together a chart showing all remaining high tides above 11 feet this year. 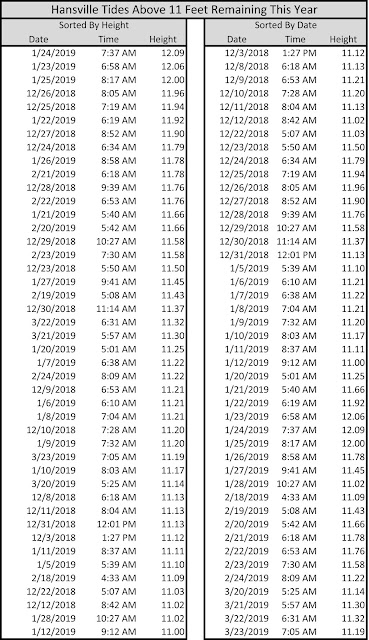 Posted by SkunkBayWeather at 12:19 PM No comments: